It is with much regret that the organising committee have had to take the difficult decision to cancel this year's planned Battle of North Walsham 1381 event.

The main problem has been with funding. The aim had always been to be provide a totally 'free to attend' event, and that would have cost us around £30k to put on. The after effects of Covid and the state of the economy has meant that some of our potential sponsors and grant funds were not able to be as generous as we had expected when planning the event and so we were left with a large financial gap to fill. The impacts on inflation has also meant that many of the performers were no longer willing to travel long distances to take part.

Despite continuing efforts to find financial backing, with just five weeks to go, we have had to accept that it just wasn't possible to continue this year.

On the plus side our schools and costume making workshops were very sucessful and raised awareness of our town's history and taught new skills that can be used in future. We will now look at ways of creating a smaller scale future event 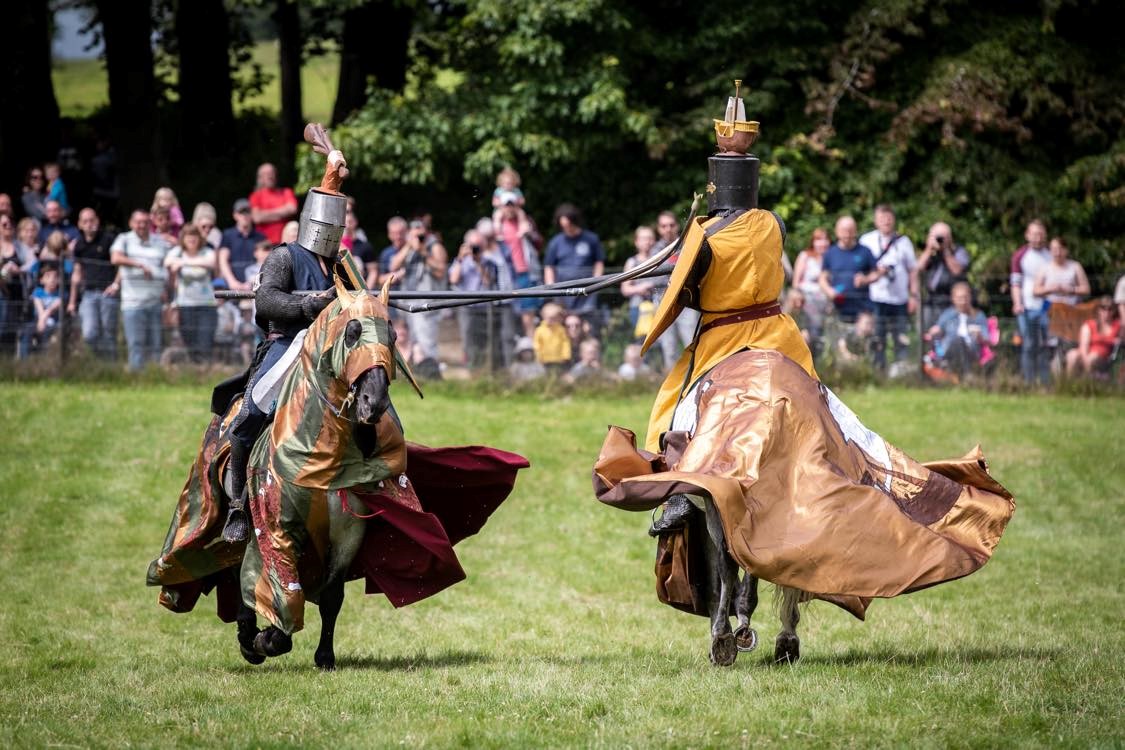 This huge new annual event  taking place around the town of North Walsham and culminating on  North Walsham’s Memorial Park is to commemorate the 740th anniversary of  this battle.

It will feature many medieval activities. Archery and combat displays and a battle re-enactment on Sunday. Medieval traders, have-a-go archery and pony rides, as well as plenty of food and drink. You’ll also be able to see and talk to armored knights, the peasant army and minstrels.

You will be able to visit the living history encampment to meet the 120+ reenactors and see how our ancestors lived in the 14th century.

In the town itself there will be lectures, guided historical walks, medieval hanging banners, concerts, mummers and mystery plays, a parade and a church service.

The event starts on Friday 22nd July with Cinema in the Park showing Monty Python and the Holy Grail.

On the evening of Saturday 23rd July a costumed Medieval Banquet will be held in St Nicholas Church.

Between January and April  FREE Costume Workshops and Costumed visits are available for local schools on the events of 1381.

Local residents, visitors and traders are all invited to take an active part in making this a spectacular new regional event. Contact us if you would like to be involved in any way.

The event is being brought to you by the newly constituted group Battle for North Walsham – 1381 Revisited and Black Knight Historical.

This website uses cookies to improve your experience while you navigate through the website. Out of these cookies, the cookies that are categorized as necessary are stored on your browser as they are essential for the working of basic functionalities of the website. We also use third-party cookies that help us analyze and understand how you use this website. These cookies will be stored in your browser only with your consent. You also have the option to opt-out of these cookies. But opting out of some of these cookies may have an effect on your browsing experience.
Necessary Always Enabled
Necessary cookies are absolutely essential for the website to function properly. This category only includes cookies that ensures basic functionalities and security features of the website. These cookies do not store any personal information.
Non-necessary
Any cookies that may not be particularly necessary for the website to function and is used specifically to collect user personal data via analytics, ads, other embedded contents are termed as non-necessary cookies. It is mandatory to procure user consent prior to running these cookies on your website.
SAVE & ACCEPT